This post is part of the blogpost series explaining coroutines, how they implemented in various programming languages and how they can make your life better:

This post is about async/await coroutines implementation which is a bit more complicated than yield but fundamentally, just like other coroutine implementations, uses the idea of suspending functions and continuing execution some time later from the same point. So the current thread doesn’t really “await” for anything but rather suspends execution of async function.

The main use-case for async/await is to make it easier to write asynchronous code or, in general, any code which uses a lot of callbacks or futures/promises. In particular, async/await can help to avoid callback hell (aka pyramid of doom) by writing programs in imperative style. The goal is to restructure program so that it’s easier for humans to write and maintain. Even though asynchronous programs is the most common use-case, async/await doesn’t require code to be actually asynchronous or use non-blocking IO. Fundamentally, it’s just about structural transformation of program.

One of the simplest async/await examples is an async function without any return values which awaits for two promises. Here promise means an object which holds the result of a computation which might be computed and will become available some time in the future (there are other terms for it, e.g. future, deferred or task). This is depicted in the following diagram (you can find description of the notation in the previous blogpost): 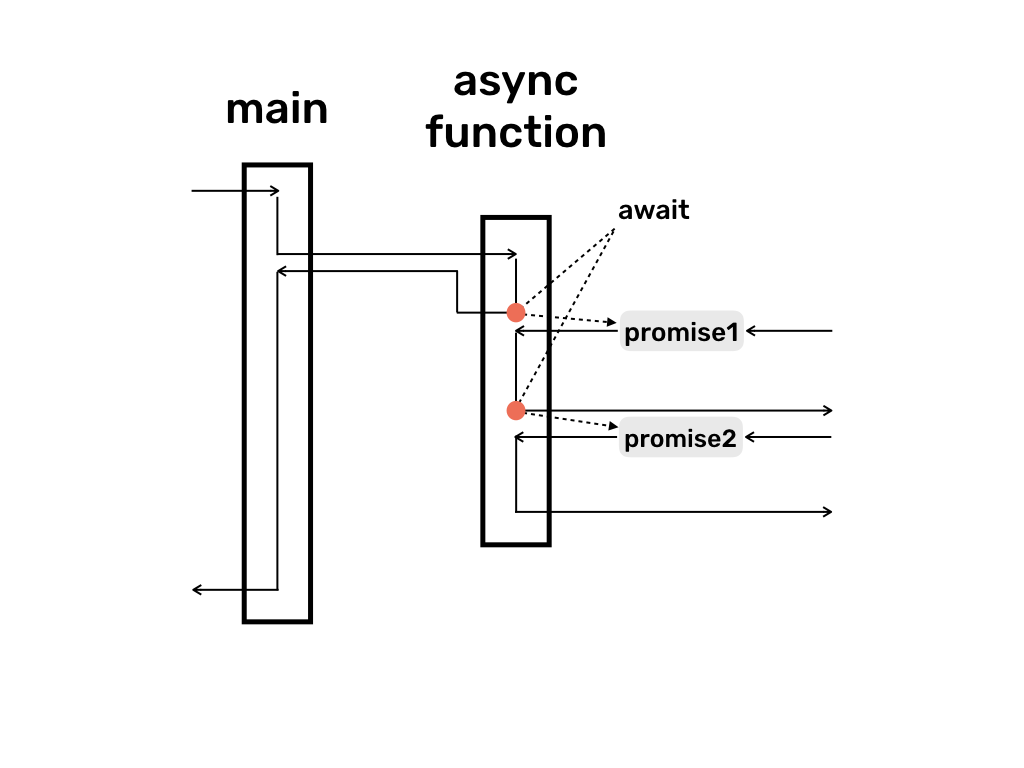 Some time later another thread observes (e.g. via non-blocking IO) that the long-running task has finished and completes promise1. Completing promise1 makes thread to “jump” back into the middle of the async function and continue from the suspension point. Few instructions later the thread reaches the second await which assuming that promise2 is not yet complete, yields execution back to whatever the thread was doing before completing promise1.

Some time later yet another thread observes that the second long-running task has finished so it completes promise2 and resumes execution of the async function from the last suspension point. This time the thread finishes execution of the whole async function. Even though there were three threads mentioned in this description, coroutines don’t mandate any particular threading model, and in this example there could be any amount of threads between one and three.

One of the most confusing things is that await doesn’t really make current thread wait for anything. If the promise is not yet completed, await chains execution of the rest of async function to run after the promise is completed (e.g. by saving current stack and instruction pointer at suspension point) and yields execution back to the calling function. If the promise is already completed, await extracts result from the promise and continues executing async function as usual. The confusion happens because we normally think about code from the point of view of a computer (CPU or a thread) sequentially executing instructions. When we see sleep(2), we think of it as current thread sleeping for two seconds (or milliseconds). Unlike most of the normal code, await keyword means “waiting” from the point of view of the current task.

The following JavaScript code shows async/await execution similar to the diagram above:

Note that function c() is marked with async keyword which tells JavaScript interpreter that this is a coroutine (similar to generators which in JavaScript are marked with *). Both promise1 and promise2 signify some long-running tasks which in this example are resolved 2 and 5 seconds after being created. It also might be a bit counter-intuitive that main finishes execution before async function c. As mentioned above this is because await doesn’t wait for promise to complete and return to main. As you probably expected, the program prints:

Waits for about 2 seconds and prints: 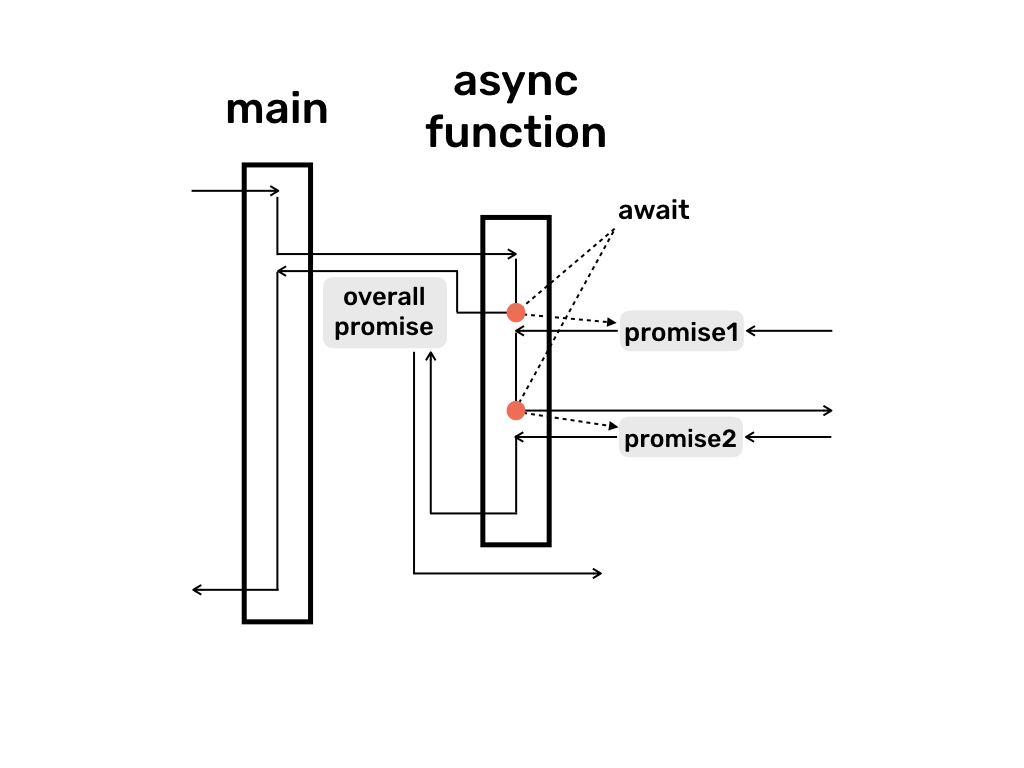 There are some details though which are hard to show on a diagram and are better illustrated with source code:

In this example, promise1 returns 🐶 after 2 second delay and promise2 returns 🐷 after 5 seconds. The async function sequentially awaits for each promise to complete and returns concatenated output (after about 5 second delay). Note that even though the async function returns a string, actual object received by main is a promise (this happens because function c() has async modifier which tells JavaScript it should do some code transformations). In the main function we register callback on overallPromise to append “!” to the result and print it to the console. As expected, the program runs for about 5 seconds and prints: 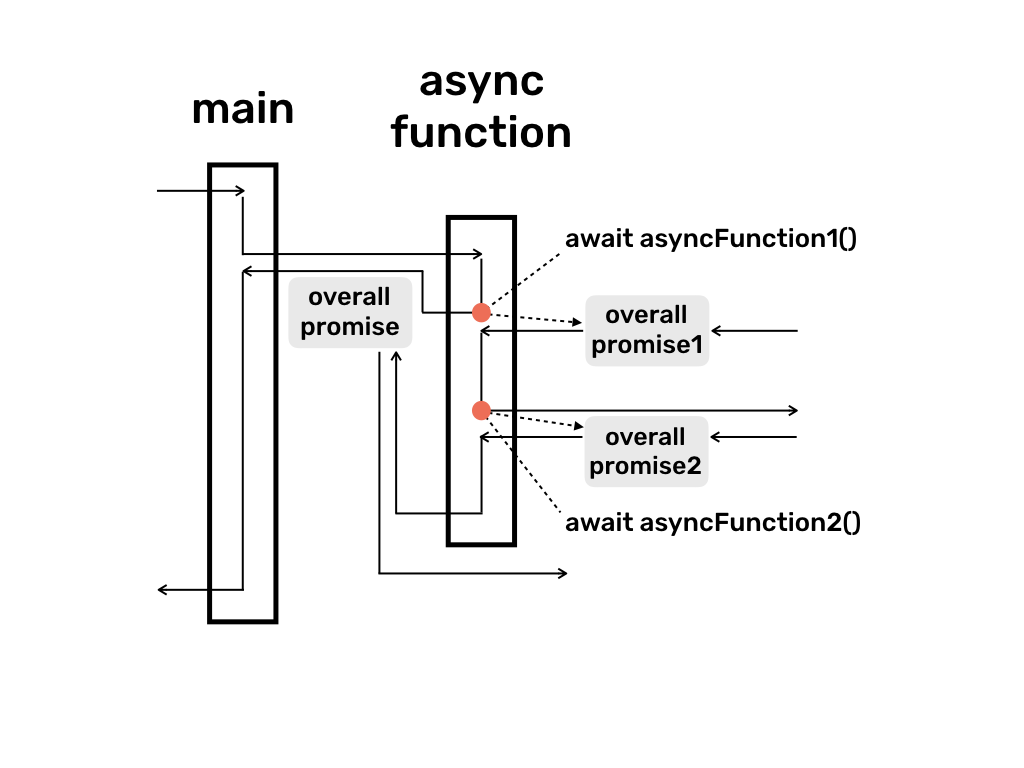 Considering previous examples it might look like async/await transforms code between await keywords into promises and chains the promises together. This is not entirely true though. In the example below you can see that similar to generators, async functions work with try/catch/finally blocks.

In this example promise1 returns 🐶, and promise2 throws 💥. After a delay promise1 will be evaluated in async function c() to 🐶 and assigned to value1. However, await promise2 will complete by throwing 💥 and will continue by executing catch and finally blocks (the code which logs 🙈 to console and returns concatenated values will never run). Note that even though async function yields execution twice, the finally block is run only once when the whole async function is finished. Because catch/finally doesn’t return any values overallPromise result will be undefined. Overall, the program prints:

It might seem that async/await does some complicated compiler/interpreter magic. Even though it’s not trivial there nothing magical about it. Using BabelJS we can transpile the code from previous example to be compatible with older JavaScript versions without async/await support.

You don’t need to understand all the code below (and parts of it are defined in BabelJS library anyway), the point here is that, similar to generators, async function is transformed into a state machine. The original code is split into snippets along await, catch and finally keywords. State matching does a switch on the current state, executes the appropriate snippet and moves to the next state. You might also notice _asyncToGenerator() function which hints that under the hood async functions are implemented as generators, i.e. fundamentally async functions can be expressed using generators.

Coroutines based on async/await are probably the most complicated to understand compared to other coroutine implementations. Fundamentally, async/await uses the same idea as other coroutines of saving current stack and executions pointer and later using this information to continue execution from suspension point. Unlike other coroutines, async/await adds quite a few things on top of this idea and adds some confusion with await keyword which doesn’t make current thread wait but works more like yield in generators.

Read next: call with current continuation.